Skip to content
Following up on the previous posts and in an effort to help people decide what is the best ERP solution for them we will be looking into other service providers in the industry. If you don’t know what ERP is, you better read this thread instead and come back later.
We’ll be looking into Software-as-a-Service companies who have major offerings of ERP and operations management – perhaps complemented with a few other minor features. However, the emphasis will be on inventory and order management ERP software. ERPs that focus mostly in accounting will be excluded from this market research since these software form a category on their own.
In order to keep the comparison structured and easy to follow we’ll be following the criteria set out in the post explaining how to choose an ERP solution.
The concept of the market research it to look for a suitable platform for your MegaComp, a business with 4 locations and 9 employees in the apparel industry.
So, first on our list is ERPLY at erply.com.
Features: Simply logging into the service it’s clear that ERPLY is a feature-rich service which can cover Point of Sale (PoS), CRM, quoting, invoicing, making payments and purchases, handling inventory. Adding all these modules in a single interface surely needs a bit of effort which has not been done in ERPLY’s case; the result is somewhat crammed and counter-intuitive. The capability to have an integrated POS (Point Of Sale) interface with just a click of the button is definitely a big plus for MegaComp and something we feel has been a huge driving force for ERPLY’s adoption and hype.

Data visualisation & export: Reporting is another section where it does well if you’re interested in having every possible feature available for MegaComp. However, the resulting output is -as far as we could see- entirely unstyled for our taste and simply lays out the data – one would expect something just a bit more fancy. Talking about data, the ability to import your business email in the platform makes for an important step towards integrating everything at a single point – definitely a step in the right direction.

Usability: We’ve found the interface overwhelming and hard to navigate. The design should help make sense of the numerous features but it ends up being simply like a spreadsheet with a few cells removed for clarity. On-site help and/or tutorials could have made a difference but they’re not there. On the other hand, the recently launched credit card reader for the iPad POS version takes the service and this particular user scenario to a whole new different level of quality.

Security: Security and backup is something ERPLY takes seriously by owning various servers across the world under specific protocol and surveillance. The various levels of security covering issues from credit card information storage to customer data being accessed only via ssh and https protocols are more than enough to relax even the most paranoid businessman – although there probably aren’t that many of those in the small and medium business tier (or if there are, their number is decreasing).
Data import: The data seem to be importable by the regular CSV method – although we had to verify that by a Google search instead of seeing an option somewhere on the interface. We should also mention of course that ERPLY integrates with established e-commerce platforms (e.g Magento, Opencart, etc) which makes it very appealing if you’ve already invested in them.
Maintenance: Support-wise there are adequate options in the shape of email, phone and a (rather sparsely populated) zendesk installation. As usual though, having a dedicated team protecting your data and handling all the platform maintenance issues (instead of you managing servers, software etc) removes a huge worry off your mind – especially when backed by a professional solution like erply. 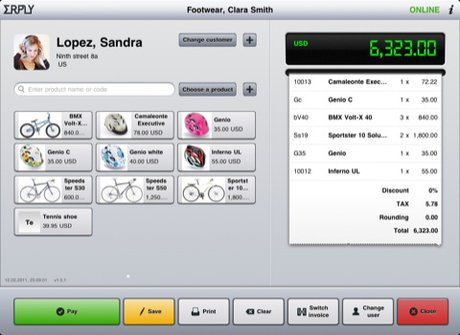 Miscellaneous: We were pleasantly surprised by the fact that erply.com supports multiple languages and is partly localized to even include Greek company types in its categorization – although we’re not sure erply.com is as impressive in other languages. We bet that the extensive localization lies on the fact that ERPLY started in Estonia and the founders understand that there is a significant non-english speaking market for ERP SaaS offerings. Also, the capability to work offline is another serious plus especially if you want to take the POS module in an expo or generally in the field.
Cost: MegaComp -a 9 employee and 4 locations company- would have to pay 225USD/mo. That can be too much if the business is basically only now starting. On the other hand, the single location, 2 user version works with 50K product codes for 70USD/mo – a quite good value for money option.
In short, ERPLY is a feature-rich, very decent solution. One might say it is too rich in features and focuses less in the usability; its user interface is counter intuitive for the average employee who wants to get the job done instead of getting lost in the tool. If you are specifically looking for a POS software, then you should definitely consider it. But even if the POS is not your basic criterion, erply.com is a major player in the market and should be given serious thought.